I used to wonder why people had a problem with sex in films. I saw it as a good way of representing the sexual chemistry between characters (or something like that).

I don’t think that anymore.

I currently have a fourteen year-old daughter who I want to share good films with and who wants to share good films with us. We want to sit down as a family and enjoy an epic action film of any genre – a science fiction, a romance (Mum and daughter more so!). But boy, have we been caught out a number of times lately watching nice films that all of a sudden feel the need to take us to the bedroom of the main characters. Highly unnecessary, I shout out in my head like some sort of reformed being. Mum starts slinking in her chair trying to throw a glance at Dad as if to say “Oh dear no”, and daughter is picking up on the signals thinking it’s hilarious that Mum and Dad are feeling so awkward.

I can’t tell you how many times I’ve had to go and check on the chips to see they are not burning, or suddenly need go to the toilet, or get something from my car, or find myself compelled to engross myself on my phone pretending nothing else is happening around me.

In the time preceding my daughter’s teenage years we had to think about how scary something might be or how violent. We had to constantly assess her maturity levels because age ratings on programmes only tell you so much. You, as the parent or carer have to make a decision.

It’s even harder for foster carers as you may also have to factor in trauma triggers such as domestic violence or drinking alcohol to name a couple of obvious ones. Sometimes you may not know enough about the child in your care to feel able to make a solid assessment on this. It can be a real minefield. 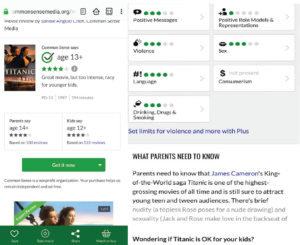 I’ve got something to help you. The website I’ve been using for the last five years is called Common Sense Media: www. commonsensemedia.org.

I have found the website invaluable in almost all of my decision making when I don’t know much about a particular film, programme or book in advance. (Clearly I haven’t always used it well).

Here’s a visual example of the information the site provides you when you look up the film Titanic:

As you can see, both adults and children have submitted reviews for the film and decided what they think is the correct age rating. You, as the user of the site, benefit from seeing the assessment of the film from the perspective of both adults and children. You can also further explore aspects of violence, sex, language etc to better understand the prospective content.

Next time you find yourself unsure about what you are about to watch, see what Common Sense Media has to tell you and sit a little more comfortably in your chair (or quickly turn off the TV)!